My thoughts on the Lost finale (a mere half hour after watching it).
Obviously I'm going to have to watch it again to fully understand everything, make that, I'm going to have to watch the entire series again, but I think that I loved it (the finale).
I have literally watched this show since the pilot. Who was I with, Mark maybe? I'm not as good as remembering things like Al is. But it's been an obsession of mine ever since I first saw the pilot. I have forced countless friends to watch it, a habit of mine when I come across something I love as many of you who know me can attest to.
After the first couple seasons I didn't always keeping up every week, sometimes not watching for almost a whole season and then getting caught up online or on dvd because I couldn't handle the weekly wait. This is dangerous if you are worried about spoilers, because in this internet age it is hard to avoid them, but for the most part I did, or if I ever did get spoiled it wasn't really that big of a deal to me because for some reason I could still totally get immersed in the show no matter what. It's about the characters and their journey and I can always get behind characters and their journey. That's my thing.
At any rate I watched the entirety of last season in the last two days, so it's all kinda swarming in my brain like I was struck by lighting. While I understand people are unhappy that they didn't get some of the answers they wanted I just gotta say I never expected to get them, the show was always like that, so why wouldn't it be in the end? And why would you want it any other way? It's like Eli said to me 10 minutes ago, a magic trick isn't magical once you've seen how it works. Which is totally true. And that's how Lost is. And I, for one, can live with that.
Posted by Camille at 9:55 PM 2 comments:

Email ThisBlogThis!Share to TwitterShare to FacebookShare to Pinterest
Labels: LOST 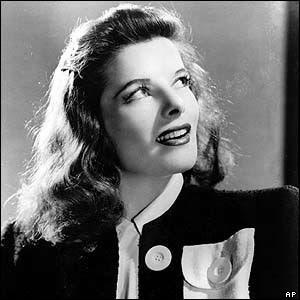 I was trying to think of what my favorite Katharine Hepburn movie was, or rather what role she played that I liked the best, and I think it's Susan Vance in Bringing Up Baby, and shucks, let's face it, I love me some Cary Grant. She and Grant also teamed up in the movie Holiday, which was good too, although not so much with the funny. Her character in that flick was inspiring though, and the movie kind of reminds me of the story I Capture the Castle, only, you know, different.

Katharine Hepburn is, was, and will always be fabulous. Go enjoy one of her flicks today.
Posted by Camille at 3:18 PM No comments:

Another picture of my cute niece. Can't have too many of these. :)

Sometimes I get bored at work. I find that making sound effects when I do things, like dropping paper into the recycling bin, makes me smile, and really, that is all it takes sometimes. Dorky, I know, but try it. Zing!

Posted by Camille at 4:17 PM No comments:

Chicken & Split Pea
Originally uploaded by cleartrampoline
Ok, so last Monday I realized I did not have enough lentils to fulfill the Lentil Soup recipe, so being the crafty creative girl that I am I decided to use split peas instead. It turned out pretty good. We roasted a couple chicken thighs too (Thriftway was running this incredible deal on them). All in all successful meal. We even ate the split pea leftovers yesterday (is that too long to have leftovers, a week? eek!) and they were pretty good. :)
Posted by Camille at 6:25 PM No comments:

Ok, so last week's menu planning went pretty well. I need to get a better handle on cooking for two though, because most recipes are for 4 or more, and between Eli and I we just end up wasting food, which, much like my sims in the Sims 3, I really hate to do! I'll post some pictures from last week later. I got some really great shots of food.

This week we are really on a tight budget, so we decided it was 'don't go to the store at all' week, which is proving to be difficult. It's like we have half of the things necessary to make many different things, but not a whole heck of a lot that goes together. It should be interesting to see what we come up with. Last night we had left overs lentils from last week with a salad and toast with cheese. Tonight, who knows? It's kind of exciting. :)
Posted by Camille at 11:22 AM No comments: