Carrie Fisher is apparently a celebrity of sorts. 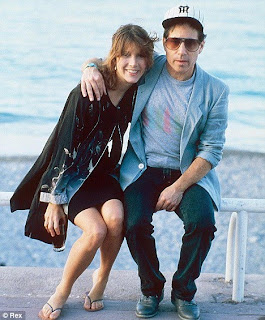 Last week was a long one for me. I worked at OMSI on Monday, and then Tuesday through Saturday I worked at my new job at the Mac Store. It was exhausting to say the least. Learning a bunch of new stuff. I'm excited though.

I've been watching a lot of Law & Order SVU lately. I really like all of the detectives on that show, but it gets a bit depressing to watch too many of them in a row, what with all the sex crimes and what not. I wish they would just investigate something light once in a while.

I was at the mall the other day and something really disgusting happened. I was washing my hands in the bathroom and there was this girl next to me who nonchalontly walked over to the garbage can and threw up, and then just went back to washing her hands. I was like, ew. So then I'm walking through the food court looking for a place to eat, and I get in line at Subway. The puking girl walks out from behind Subway. She works there! I did a 180 and made a bee line for the Steak Escape. Consequently, I will never eat at the Subway in the mall.

I read Carrie Fisher's autobiography Wishful Drinking cover to cover this week. It was hilarious, I couldn't put it down. She did a great job describing her life, and all while being entertaining. Lots of stuff I didn't know about. I ended up staying up til after 2am finishing it. Now I want to read Postcards From the Edge.
Posted by Camille at 12:33 PM