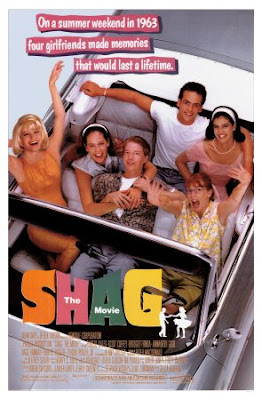 Today was the best day at work ever.

An actor, Scott Coffey, from one of my favorite movies as a teenager, ate at the cafe today. You know the type of film I'm talking about here: dancing, girly fun time movie. The film is called SHAG. It's from 1989.

You probably never saw it. It wasn't a huge success. But it was a must see among me and my friends Sara and Megan. We watched it a lot. And when I say a lot I really mean a lot. Like, I know the lyrics to all the songs, and to a lot of the lines, and even tried some of the dance moves. I wanted to be Pudge and dance at the Shag contest with Chip. That's how into this movie I was.

So you can imagine my excitement at seeing the actor who played this awesome, sweet, dancing and fun character when he ate at the cafe today. I totally gushed over him and was like, all star struck and giggly like a nerdy nerd girl. It was awesome.

Did I mention any of his more recent rolls in more renown movies like Mullholand Drive or Ellie Parker, the film that he wrote and directed? No. I brought up the romantic comedy he was in 20 years ago. He must of thought I was a total loon. At least I didn't mention his roll in Ferris Bueller's Day Off.

Email ThisBlogThis!Share to TwitterShare to FacebookShare to Pinterest
Labels: movies