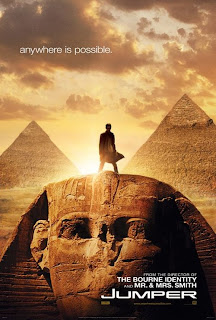 So this weekend I saw the film Jumper, starring Haden Christensen, Rachel Bilson, and Samuel L. Jackson. I think this film thought it was going to be radder than it actually ended up being, or thats what it would think if films thought. I mean, they left so many things open at the end, a little too obvious that they want to make a trilogy, or at least a sequel. It just felt like a cliffs notes intro into a bigger story.

Haden was good, Rachel's hair kinda bugged me and she made a lot of strange facial expressions, and Samuel L. was just harsh, and weird but maybe that's ok, since he's the bad guy.

The plot had more than a few holes. Like, we are supposed to believe that Haden's character cares for his dad, after he ran away from home for 8 years cause his dad was a drunk and was all mean to him.

I mean, watch it if you are a big Haden Christensen fan, but if not, wait for it to come out on dvd, or better yet, catch it on tv when nothing else is on and you are bored.
Posted by Camille at 9:46 AM