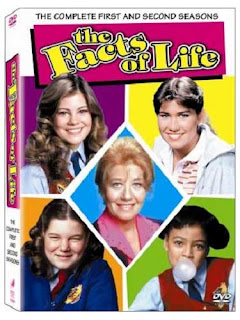 What's with the Facts of Life cutting half the cast and changing the theme song after the first season? I mean, why fix was isn't broken? And as much as I love the character Jo did they really need to introduce a new character? I mean, I guess they just wanted to mix it up for a new season. Being a spin off of Diff'rent Strokes I guess they just felt they had to keep it fresh. Dang. Since I've only watched Seasons 1 & 2 I can't really comment on how it went after that but the first season is cooler than the 2nd.

And what's with them getting rid of Tootie's roller-skates? It's like, what, it's not cool to be constantly wearing roller-skates anymore? It worked for roller girl. And what the hell is with the name Tootie anyway? And what's with the clapping at the end of each segment, like right before it goes to commercial (or not since I watch it on DVD)? That is just weird. It would makes sense if there was some poignant (ha!) line that you were like, yes, I'm gonna clap to that, y'all. But it happens before every commercial, with really non poignant stuff.

And why is Blair so boy crazy? I mean, they don't expect us to actually think she would go all the way with a boy, do they? And seriously, she can be a real b.i.t.c.h. Who would put up with that? Some of the stuff she does to the other girls, like making them think they're fat so they go on a anorexic diet, for example, or implying that they are, gasp, a lesbian or something, gesh, you would get kicked out of boarding school for that, right? Maybe not. I never went to boarding school. What do I know.

Ugh. This show is awkward, the same way Saved By the Bell is awkward. Man, I watched that episode the other day when they break Screech's mom's Elvis statue, HORRIBLE. You want to cringe and look away, but you keep watching it... maybe it's for nostalgia, maybe it's cuz you are really bored, or maybe, just maybe, you actually like it.