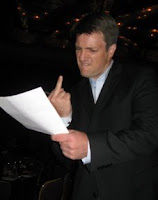 there was a time, mostly during 2006 when i would post on this blog pretty regularly. i want that time back. so here is me, attempting that.

is it weird to be entertained by your own past blog posts? there have been a few times that i have spent like a good hour reading old blog posts on this and my myspace blog, which is kinda weird, but really, its not that weird. how bout y'all, anybody else take a stroll down memory lane once in a while to read old blog posts?

so sometime in october a friend of mine sent me an invite to this page, goodreads in which one can manage books that they've read or are going to read and share them with friends etc. well today i sent out invites randomly to a bunch oh people (if you didn't get one that just means that i don't have your email address saved in my gmail. if you wanna friend me on goodreads drop me a message). the wild thing is a bunch of people jumped on that site and now i have like 9 friends on there sharing their book recommendations with me. its kinda rad. although i've only been reading stephen king books and graphic novels (sometimes both at the same time!) lately, i'm gonna have to come up with some recommendations for peeps.

speaking of stephen king, i just finished from a buick 8. it was rad. stephen king does such a good job creating these characters that you believe that they are real, you know? that sounds lame, but i don't feel like elaborating today. i was going to write a blog on silvertrampoline but i couldn't even be articulate enough to talk about snakes on a plane for christ's sake. dang, blasphemous much? anyway i think i'm going to tackle the stand again. i had got about half way through about three years a go or so, but with schoolish obligations lost track of it. i think i'm going to start over from the beginning too, seeings as i don't really remember a lot of details.

so you know when you see a movie that you are expecting to really like, and other people that you usually share similar tastes with really liked it, and all of your most respected film critics raved about it, but you just through, eh. yeah, that has happened twice recently. first with waitress. i really wanted to psychotically love this movie. i did. nathan fillion. keri russell. in the same film. it was a match made in heaven. i just couldn't get into it. i don't know. maybe i need to watch it again with some like minded individuals. some movies are best enjoyed in the company of others, which is a shame since most of the movies i watch are at home, with my ibook on my lap and a hot cup of tea by my side. the second film this happened with was p.s. i love you. now, i actually didn't read any reviews of this, but it had james marsters in it, and all friends and signs were pointing to a 'you're really going to like this' experience, but again, eh. it was good, but not great.

am i getting jaded? god i hope not. i'm not even 27 yet. i read on some celebrity blog, like perez or something, that jessica alba was talking about feeling old since she's about to turn 27 and how all these famous peeps died at 27, like kurt cobain. i'm like dang, i have accomplished jackshit. i need to get on it, if 27 is old.

right now i'm listening to... the shangri-la's- remember (walking in the sand) a lot. it is soo rad. buy it on itunes. you will not be sorry.

i was listening to npr today just before fresh air, and she was talking about how in the upcoming episode she was going to be interviewing some dude who is in that new movie, there will be blood, and she was going to talk to him about what it's like to act opposite one of the greatest actors of our time, daniel day-lewis, and i was like, hell yeah! one of the greatest actors of our time. that just sounds so nice. i love d day and i can't wait to see that movie. its getting such good buzz.

i think that's about enough for today. what to do now... watch a film i have to review by friday or watch the firefly episode safe? you do the math.
Posted by Camille at 10:35 PM