So E. Bailey, my good friend, has requested that in the spirit of Robert Smith, we make a list of our 39 favorite things. You can check out her explanation for this over at her blog, Sladkaya. I haven't planned this out a head of time, so I'm just going to write the first 39 favorite things that come into my head. Here goes. In no particular order... 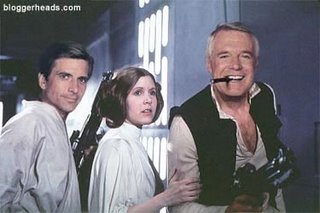 So yeah. I graduated. It basically rocks. Having a Bachelor of Arts in English with a minor in Professional Writing is just so rewarding, I mean, I'm getting job offers left and right. Actually, I'm interviewing for this job at OMSI for the upcoming Star Wars exhibit, you heard right folks. I might actually get paid to talk about Star Wars for 4 hours a day, 5 days a week! Oh my. What will they think of next?
Posted by Camille at 9:48 PM 1 comment: Links to this post

I have a new tv obsession. Prison Break. Action action action. It's awesome. I haven't had that good old I can't stop watching this even though its like three in the morning and I have to get up early tomorrow for a long time. It's good to be into something again. :)

P.S. Did I mention that I'm graduating from college? If any of you all are going to be in my town, give me a call or an email or something of the like. I will invite you to a party at my house.

I can't really say that I've ever had a big party at my house, and by my house I mean any house that I have lived in. On the one hand, I want to have a huge party to commemorate myself for finally graduating from college, which may not seem like a big deal to some it is a mighty big deal to me. On the other hand, do I really want to do deal with all that a party entails? There is so much responsibility there. I just want to have fun. blogspot
Posted by Camille at 11:50 PM No comments: Links to this post

I shaved my legs yesterday. For the first time in like... I can't even remember. It feels nice. Soft. They look so pale.

So I'm sitting on my front porch, and a man walks by, carrying two grocery bags from safeway, and he says to me "I saw you yesterday."

What the hell does that mean? Like, he saw me yesterday sitting in this exact same spot with my computer stealing wifi from some unsuspecting neighbor? Or, he saw me doing something illegal, like when I killed a cat and robbed a bank yesterday? Kinda weird, no?

A thought, from me to you, from the Beatles "Across the Universe"

Images of broken light which
dance before me like a million eyes
That call me on and on across the universe...
Posted by Camille at 10:47 AM No comments: Links to this post

i get to go watch buffy tonight. at the mission theater. and angel is going to go all evil and shit. and i'm gonna drink some beer. and it will be fun. wish you all could be there. :)
Posted by Camille at 8:01 PM No comments: Links to this post

so i saw clerks 2 yesterday, and i gotta say, it didn't suck. infact, i found it rather entertaining. jay spoofing that creepy guy from silence of the lambs was priceless. is it a little weird that i want jason mewes to be my boyfriend? that is a little weird. i'll just answer my own question.
Posted by Camille at 10:11 PM No comments: Links to this post

Let's see. I haven't really posted much lately, so I feel like now that I am sitting here drinking a double espresso on ice and doing nothing much else I should come up with a good blog or something.

What's new? Well, nothing much. I'm going to be graduating August 19th (cross your fingers). That's pretty exciting, because it's really not that far away. All that's standing between me and being a college graduate is finishing this news writing class. :) I'm actually really enjoying it. I think I could be a reporter. It's pretty fun. Lots of work though. I just want to do something to put my degree to use, you know? I don't care what it is, but I want it to be worth something (because it has cost me a lot).

What else? Well, I've been working like a... a something that works a lot. I worked pretty much every day in July except for the 4th. That was crazy. August is pretty busy too, but I think I managed to schedule myself one day off a week between my three part time jobs. :)

I've been taking a lot of photos lately. I really like taking pictures. I think I've been coming up with some cool stuff, but I just have a little point and shoot digital, and I'm not really getting the picture clarity and results that I want with it. Some day when I'm making some big bucks I'll buy myself and nice shiny expensive camera.

I spent a lovely day hanging out in Hood River last Thursday. I drove to HR Thursday morning thinking that I was working at Elliot Glacier Public House only to find out that I was not. Ordinarily this kind of schedule confussion would have made me frustrated, but since I hadn't had a day off in eons I was kinda excited. I spend the day with Sarah Breeze, we went to the river and lounged around and I saw some peeps in HR I hadn't seen in a while, and I went to a going away party for Adam Lappiere who has gone off to Japan for a spell.

Anyway that's about all I have for now. Keep it really ya'll.
Posted by Camille at 5:40 PM 1 comment: Links to this post

"i never really cared for a guy who's kinda smarmy."- overheard at sydney's cafe. :)

i want some grapefruit.

i miss my dog jake.

where's my pedro the lion t-shirt?
Posted by Camille at 9:53 AM No comments: Links to this post