So last night I wandered over to the land of NW Portland to see the movie Serenity on the big screen. Now, granted, I did see it on the big screen 4 times while it was out in theaters, but this showing was something else. First of all, it was for charity. Put on on Joss Whedon's birthday to benefit Joss Whedon's favorite charity, Equality Now. I'm all for the charity cause, but being nearly a charity case myself, it was a bit of a struggle for the 10 dollar ticket price. I conceded, of course, because, well, as those who know me well I'm a slave to the Firefly/Serenity 'verse.

The night started off with a quick bus ride on the 9 over to downtown Portland. Not sure of which bus to take, and not having the foresight to check on it before leaving the house, I decided to just walk from Pioneer Square to Cinema 21. I ended up walking through a little section of down town that I rarely see, even out the window of my passing car. It was strange, and cool, as I strolled along glisan listening to my ipod on shuffle. You know when you fill you ipod with songs that you love and then you put it on shuffle? Its like, you are almost always giddy with what song gets played. Anyways it was a nice walk, the weather being all nice and warm these days.

Anyway I stroll up to Cinema 21 a little after 8pm. The show is reportedly supposed to start at 9pm, so I figure, get there a little early to get a good seat, chill in line and watch for fanatical folk dressed up and wearing brown coats. I gotta say, I'm a little surprised there weren't more people dressed up in costume. There were quite a few people wearing Serenity shirts, a few wearing my personal fav, the Joss Whedon is my Master Now shirts, a few people wearing Blue Sun shirts, a few people wearing shirts that I hadn't really seen before, and a few people wearing Jayne's hat, but as far as costume sporting, I really only remember seeing a girl dressed as Kaylee from the pilot episode, with the silk jacket and the parasol. It was pretty cool though. Oh, and there were a few people wearing Hawaiian shirts, which I'm assuming was a nod to Wash. As I was standing in line I remembered one of my old tshirt making ideas, a tshirt with the phrase 'we're just here to meet boys'. I was thinking about how I could change the shirt just a little to fit any occasion, like if your going to be seeing Serenity with a sold out group of fans at Cinema 21, you could wear a shirt that says 'we're just here to meet browncoats' or if you are going to a comic convention or something equally geeky, you could have a shirt that says 'we're just here to meet geeks' etc etc. I'm gonna have to just start making them in my basement. People can place their orders at any time. :)

So back to the line, when I got there a little after 8pm I was getting in like just about before the end of the block. I was thinking, ok, not bad, maybe 50 people in line before me. Caldoni shows up, and we chat up on topics ranging from daily life in ancient Rome to zombie movies from the 40s. That guy is a respectable conversationalist, I have to say. Its like he knows information on any topic you could possibly bring up. Its awesome. So while we were talking in line, and eavesdropping on other dorky conversations that were happening around us, time flew by and before you know it, it was after 9pm, and they began letting people into the theater. I handed over my ticket, and received another ticket of sorts. 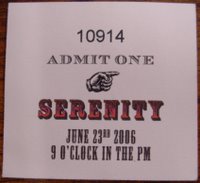 It's a pretty cool design, and has the number 87 on it. I think Caldoni got the number 86, so I'm assuming that means that I was the 87th person let into the movie. So we get into the theater, and pass tables selling merchandise and raffle tickets, and head up to the balcony. I reflected to Caldoni that the last film I think I saw at Cinema 21 was that movie Spun, starring Jason Schwartzman, which kinda sucked. Now that I think about it, I think I saw the director's cut of Donnie Darko well after that. Not that any of that matters, as Annie Hall would say, La-di-da, La-di-da.

At any rate, we find some seats, and it being a little after 9, I assumed the show would start quickly. Well, since there were so many darn fans (of which, I gotta say, I'm a little pleased about, Portland having such a great Browncoat population), it took forever to get every one seated, and after a few introductions, and a round of happy birthday for Joss, the show finally started. Now, of course, I've seen the movie quite a few times, as I'm assuming many a person in the theater did as well, so any time something cool happened everyone cheered or clapped. Or when anything funny happened, the entire audience was laughing as well. It was kinda cool. When the screen goes black and quiet and that Serenity logo appears on the screen, I just get all giddy inside, and you could feel that everyone in the room felt the same way. And that's just nice. Although I just have to mention, out seat picking skills were a little lacking on this day, because both Caldoni and I ended up sitting behind people that we couldn't see over, and so the constant struggle of trying to look to one side or the other went on throughout the film.

Overall, it was a pleasant showing. The film ended, and being it was already later than expected, we didn't stick around for the credits to roll. Walking out on to NW 21st, I realized that bus 17, which goes to my neck of the woods, stopped on that street, and Caldoni and I went our separate ways. It was a little serendipitous too, because the movie got out just after midnight, and the last bus on that line arrived at the stop at 12:15. I rode home, again donning the ipod, and read a rather disturbing chapter in Stephen King's The Cell. A bus ride is always a good end to the night, gives you time to think.

All in all, it was good times, and an excellent Friday night.
Posted by Camille at 9:48 AM