Today is the greatest... 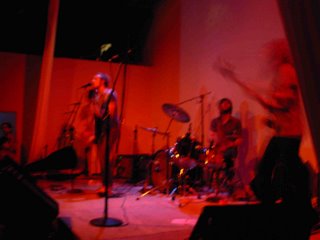 Yesterday was a big day. I went and saw Posiedon (not so much good), I saw the Shaky Hands play at the Holocene (very good), and there was a four alarm fire in SE Portland (probably not good, but interesting anywho), with flames and everything. Now it smells all like smoke outside, I hope I don't die from, you know, like smoke poisoning. :) Check out my Shaky Hands pictures. They kind of suck (the pictures, not the band), cuz I don't have a totally pimped out camera, but they are cool non-the-less.
Posted by Camille at 12:23 AM