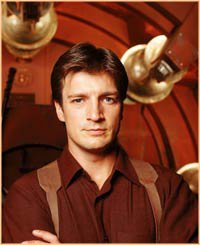 So seriously, why aren't more people going to see Serenity? It is good! I don't tell lies! Go buy Firefly on DVD and then watch Serenity and then enjoy it dammit! But seriously, I just read this post Joss Whedon made on Whedonesque, my daily source for all things Whedon. He is a funny man, and I'm sure I'm one in a million people wishing he was my friend. At any rate, if you are actually my friend, oh those surfin the internet and its respective superhighways, go see Serenity. Get into all things Joss. Well, maybe not all things, just because he wrote some episodes of Roseanne early in his career doesn't mean I'm going out to buy Season Two of Roseanne, but seriously, Buffy the Vampire Slayer is awesome, (the show, not the movie although the movie is good for some laughs and for Luke Perry), Angel the Buffy spinoff is even better, (there, I've said it, I like Angel better than Buffy, both the shows and the characters. Although that doesn't mean I like Buffy any less, I just like Angel more, whatever, I'm getting carried away) and Firefly, is even better than better, it is gooder than good, it's the best. 'Why did it get cancelled in it's first season then?' you might be asking me. To that I reply, well, why did Freaks and Geeks get cancelled, huh? Why do good shows get no viewers and get cancelled before their time? It's because dumb asses like you aren't out their watching the good shows! Wait, I take that back, you are my friends, not dumb asses, I'm talking to those people, I affectionately like to refer to them as 'them'. Those dumb ass Americans who are to busy watching lame shows like the Apprentice and... and other shows that suck. Getting carried away again. So, here's the point, watch good shows, go see Serenity, and keep your eye out for Joss, who is going to be a guest star on Veronica Mars tonight, because when you are in the entertainment business and you like a show they let you guest star on it, I guess. For more fun, check out this post by Joss here, it is entertaining, more so if you are into the 'verse, but even if you are not.
Posted by Camille at 5:09 PM