“As a lifelong fan of Marvel comic books, and as an adult reader who’s seen comics “come of age” and take their rightful place in the world of fantasy and science fiction,” says Stephen King. “I’m excited to be a part of Roland’s new incarnation.”

The series will be illustrated by Eisner-award winning artist Jae Lee.

“My life changed overnight when I learned I'd be working with Stephen King!” exclaims Jae Lee. “I know how special The Dark Tower series is to him. I'm incredibly honored that he would allow me to be a guest in his world.”

Keep checking Marvel.com for more information on one of the biggest projects in 2006. And be on the lookout for free bookmarks featuring the exceptional art of Jae Lee, at comic book shops and bookstores nationwide this holiday season.

This is straight from the Stephen King Newsletter (that I dorkily, if that is a word, am a reciever of). This sounds cool as cucumbers. And looks cooler than cucumbers. 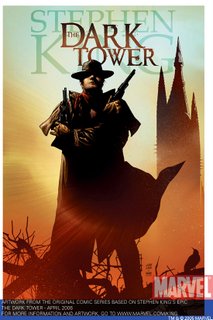