On motherhood and being an artist

It's been a while since I've done anything with this space. I've had a few fits and starts, and a few times I've thought, I'll just start a new blog or a new site, but that's just crazy, I don't need to "rebrand" myself when I'm basically just writing for myself and my friends who will likely be the only people reading this. I also have this problem, you know, how does the saying go, perfection is the enemy of good? It keeps me from putting out things that I worry aren't good enough. But sometimes the act of putting things out there even if they aren't perfect is important to the process of being an artist. Otherwise what are you?

I would like to get back into daily/regular writing, or at least semi regular writing. The last few years have been a blur of trying to get pregnant, being pregnant, and having two little babies who have forever changed out lives. I was anxious before, and I'm anxious now, but as always I'm working on that each day, or each hour sometimes. When it comes to creativity, I have to constantly work on the negative self talk. It has me stopping before I've even begun sometimes and that's just sad.

My other creative outlet in life, photography, has also fallen to the wayside. I haven't taken any photos in a serious way for a few years now. Creating a family and becoming a mother was an all consuming process for me, and of course I don't regret any of it because of the two wonderful little people I now get to spend life with, but it still makes me kind of sad that my photography has fallen to the way side. I feel really, really out of practice. It's so funny, my relationship with photography, because I love it, so much, I've spend what feels like most of my life behind the camera, but I have always been insecure and had this feeling that I'm not as good enough, not as good as I wish I was, so what am I even doing?

I know like anything in life you get better at them the more you practice, but some things, especially creative endeavors, are hard because there is this sense that there is some like magical it factor, you have it or you don't, you're a real photographer or your just another girl with a camera who thinks she's a photographer. I feel inferior to many male friends and acquaintances that I have, and I don't even know why. I'm always fighting these stupid battles in my head. I have been a creative as long as I can remember, since I was a child, writing stories, drawing and painting pictures, and taking photographs. I still vividly remember and mourn the loss of my first camera (a mickey mouse 110) and oh my word I just googled it and found one on ebay! I should probably buy it!

Anyway these things are still so important to me. Sharing the things I create with others is important to me. Really, I am not me if I am not creating art in some way. I need to get over the "I'm not good enough" and get back into doing the things I love. And I think I've finally come out of the fog of new motherhood enough to give it a fresh start.

And even though it's scary to put this out there, I'm going to hit the publish button.

Anyone else ever feel the same way? How do you balance motherhood and creativity? Wouldn't it be nice if we could create a community of support for each other to create our art? And not just mothers, anyone who feels like they've let their creativity fall to the side. Drop me a comment or send me a message! Let's support each other!
Posted by Camille at 10:50 AM No comments:

I have lots of ideas lately of things I want to work on, but have been too busy to get a good start on anything. Art and crafts and sewing projects and some new ideas for things I might want to try to sell in my etsy shop like vintage cookbooks, etc. So many things percolating. I'll share more soon!

I have been so focused lately on some personal things in my life that I have not been taking enough time to do the things that make me feel whole, like making art, gardening, crafting things, and most of all taking pictures with a real camera (not just my iphone). I used to take so many pictures! I looked back at the last 6 months and I've hardly taken any with my camera. It's sad. I need to get back in that creative space that I really thrive in. Today I just took out my camera for no good reason and snapped a few snaps, then I looked back through the most recent pictures on my memory card and found some fun stuff. Here are some pics I found from our trip to Arizona in February. Good times! If you want to see these pictures in better detail head to my flickr album for this set.
Posted by Camille at 9:53 PM No comments:

We got HBO Now a while back so that we could watch Game of Thrones this season. The awesome side effect of that is that there's a ton of other great stuff to watch on there too. Like VEEP, have you seen VEEP? It's so good! You should watch it!

Anyway, this is especially good because we don't have Netflix anymore. The reason why is a long story for another day, but Netflix was getting old anyway. Unlike Netflix, HBO has a ton of great movies that you actually want to watch, where it seems like Netflix just had a ton of movies that you either have already seen and don't want to see again, or have no interest in seeing at all, haha! Maybe I had had Netflix for too long, but I felt like I was running out of movies to watch and only ever watched TV shows. I'll admit Netflix really shines in the TV show department, and I love me some TV.

But you know what, I also really love movies! Especially good ones. But sometimes bad ones too. So my plan is to watch more movies. Side note: I miss video stores where you could go and walk down the isles aimlessly until you found the random flick that caught your interest. Oh the memories!

Anyway, last night while falling in and out of sleep on the couch (long week ya'll) I watched the 1989 hit film Her Alibi, starring one of my personal favs, Tom Selleck. And I rewatched it again today. Spoilers below, as if that even needs to be said for a movie from 1989, haha! 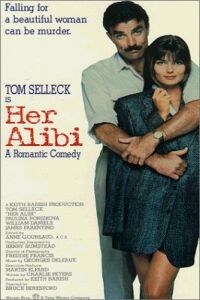 I had never even heard of this flick, which surprised me because it couldn't be anymore more up my alley! Goofball humor! Tom Selleck! Mystery! Main character is a writer! Oh goodness. So, let me tell ya a bit more. Tom Selleck plays a mystery writer named Phil Blackwood, who is having a four year bout of writer's block, and his publisher/editor/whatever is like, you've gotta write a book, STAT! PS the publisher/editor/whatever is played by Williams Daniels, aka MR FEENY from Boy Meets World.

Anyway so in an attempt to get some inspiration he goes to court to watch people being arraigned, and meets a beautiful Romanian woman named Nina (played by Paulina Porizkova) who is being held on suspicion of murder, and he decides it's a good idea to MAKE UP AN ALIBI for this complete stranger and get her out of jail! High jinks ensue. There's a seductive hair cutting scene; a trampoline jumping, heart pounding escape from bad guys in a grocery store; Phil getting shot in the butt with an arrow; Phil falling in a barrel and rolling into a picnic table; oh it goes on and on.

One of the things about this movie that really I like is the way that the action is mirrored by the book that Phil is writing, the next in his series of mystery novels following the detective Peter Swift! He's basing the book on what is currently happening in his life, but the hilarity is that the novel is so hyperbolic compared to what is actually happening, his character Peter Swift is much cooler than he is, level headed, sexy and brave where he is not. The voice over reminds me of Magnum, P.I. but it is much more silly.

So of course Nina finds the book on his computer and reads it and storms out, mad that he is just using her to write a book and doesn't really care about her. He has to win her back by helping her find her parents, circus performers who've defected from Romania!


"How do you say in Romanian, get lost, dickface?" -Tom Selleck


Ok, so this movie is very silly and ridiculous most of the time, but it was fun to watch.